Model of Lisbon before the 1755 earthquake

Designed by the historian Gustavo de Matos Sequeira, the model was made by the modeller/decorator Ticiano Violante’s studio and included sailing vessels built by the artist Jaime Martins Barata. The project took almost 15 years to complete. The first contract signed between the Lisbon Council and Matos Sequeira dates from 1945. The aim was to build a large model of Lisbon’s historical center before the 1755 earthquake.

It took them ten years to finish and it was ready for the Exposição Iconográfica e Bibliográfica Comemorativa da Reconstrução da Cidade depois do terramoto de 1755 [Commemorative Iconographic and Bibliographical Exhibition of the Reconstruction of the City after the Earthquake of 1755]  (Galveias Palace, 1955).

In 1956, the Lisbon Council signed a new contract with Matos Sequeira to expand the model up to Ribeira de Alcântara, to the West. The whole model was exhibited at the beginning of 1959 in the Sala Ogival of Saint Jorge’s Castle and has been included in the Museum of Lisbon’s exhibition since 1982.

More than 50 years after its completion, the model still remains a faithful depiction of Lisbon on the eve of the earthquake on the 1st of November 1755 – showing a riverside urban area, stretching along the river from Alcântara to Santa Apolónia and northwards to Rato and Senhora do Monte. This model, which is one of almost 300 belonging to the Museum of Lisbon’s collections, is an outstanding source of information on the history of the city due to its size, accuracy and visual impact.

Discover our program of guided visits to this piece 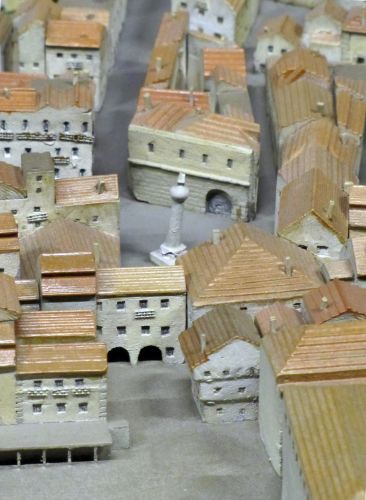